Sarangkot is the most popular tourist destination from where the tourists can enjoy the great view of the Pokhara Valley and the magnificent view of the mountains such as Annapurna Massif, Fishtail Mountain, Dhaulagiri range, and Manaslu. Sarangkot is only 5 km from Lake Side from Pokhara and highest view point at 1592m high for Sunrise and Sunset view over the snowy peaks. Sarangkot can be reached easily by 45 minutes by a car ride to the top from Pokhara and then 45 minutes hike up to the main view point.

Paragliding can also be done from Sarangkot. From Sarangkot, on the northern direction we can see Dhaulagiri in the far west. Annapurna range is visible when the weather is clear on the same side. On the southern direction the village overlooks the city of Pokhara and its lake on the north-western outskirts of the city. Paragliding in Nepal can be a truly wonderful and fulfilling experience for the adventure seeker. A trip will take you over some of the best scenery on earth, as you share airspace with Himalayan griffin vultures, eagles, kites and float over villages, monasteries, temples, lakes and jungle, with a fantastic view of the majestic Himalaya. Paragliding is another adventurous activities being carried out in Nepal to amuse the visitors. There are various places suitable for organizing paragliding but Sarangkot (1592m) in Pokhara is the best among all. We would go for at least 30 to 45 minute flight which would provide an exiting experience that would cherish for the rest of life. For those who want to find out what paragliding is all about , the pilot will explain and about it and teach its use so that it would be easy for anyone to control the glider. October to April is the best period for paragliding in Nepal. It is one of the best ways to view Nepal and its Himalayan panorama by a short flight from Sarankot. While on flight , one can observe the glory of Annapurna range and beautiful landscape around Pokhara valley, virgin Mt; Fishtail (Machhapuchhre), Lamjung Himal, Annapaurna Himal, Himchuli, Fewa Lake, Rice field, Rivers and settlements. Certainly, the flight gives anyone thrills with a great photographic opportunity.

Tandem Flight
Tandem flying involves a passenger flying with a pilot. Both have separate harnesses that are attached to each other and the wing. Paragliding harnesses are built for comfort and safety; they feel more like an armchair. After take-off the passengers just sits back, relax and enjoys the unfolding magnificent sceneries. Because Para gliders can foot launch and gently foot land again and are very portable we can take them anywhere and fly from most mountains in Nepal.
1. Cloud-Buster
This is midday flight gives you the thrill of a high flight as we thermal up above Sarangkot in the company of eagles and vultures. It's a 30 minute flight and we land by the lake.
2. Cross-Counrty
This is one hour flight offers you the chance to experience flying from one valley to another. Using thermals, clouds and birds to guide us, we take you on an unforgettable journey north of Pokhara towards the Annapurna mountain range. Based on the weather conditions we fly as far as we can and aim to return to Pokhara same afternoon. A fly reach altitude of between 2500m to 3400m before returning Pokhara by air.

Email Us for more information and booking

from 1.310 USD / Days: 10 / Difficulty: 2 of 5 (Moderate)
Annapurna Panorama View Trek, also known as Ghorepani Poon Hill Trek, is a short yet a popular and classic trek in the Annapurna region in western Nepal. This trek offers a spectacular view of mighty Annapurna and Dhaulagiri massifs along with the panorama of ever splendid Machhapuchhre (6993m). Essentially an easy teahouse trek, the route is surrounded by lush rhododendron forests that lead to...

/ from 870 USD / Days: 4 / Difficulty: 1 of 5 (Easy)
Bardia National Park Nepal is the largest untouched wilderness in the Terai region of Nepal. The park protects 968 sq km of sal forest and whispering grassland, bordering the Geruwa and Karnali Rivers. The atmosphere is wonderfully tranquil and with the current slump in tourism, you may well have the whole place to yourself. There are estimated to be around 22 royal Bengal tigers and 100...

/ from 910 USD / Days: 7 / Difficulty: 1 of 5 (Easy)
Day Hikes from Pokhara is one of the shortest and easy hiking holiday around Pokhara valley. Besides being one of the major city of the Himalayan kingdom of Nepal, is the place from where one can start the most exciting treks to the Annapurna region, which is seen hanging out in front of you as you enter the Pokhara. These mountains are just 30 — 40 km away from Pokhara. Trekking in...

from 740 USD / Days: 3 / Difficulty: 1 of 5 (Easy)
Pokhara, the city of Lakes, is blessed with extreme and remarkable nature beauty. This place is famous for centre of adventure like White Water Rafting, starting and ending point for popular trekking destinations, Paragliding, Jungle Safari, serenity of Lakes, stunning panoramic view of Annapurna massif, Machhapuchre and Dhaulagiri Range. This is the best place to relax and the magnificence of...

Tour Detailled Itinerary
Day 1: Arrival in Kathmandu/Pokhara
Arrival in Kathmandu Tribhuvan International Airport and you will be met at the airport by our representative who will be waiting with a Swiss Family Treks sign outside the terminal and transfer to Hotel by private car. Welcome drink and after you settle into the hotel there will be a group briefing with your tour leader. He will discuss the trek details and co-ordinate any last minute arrangements. If you are arriving in Pokhara by overland from Nepal-India Border and transfer to our booked Hotel. Overnight at 4 star hotel in Kathmandu.

Day 2: Fly from Kathmandu to Pokhara 820m/25 minutes.
In the morning, we transfer you in the domestic airport and flight to Pokhara with scenic mountain views including Langtang, Ganesh Himal, Manaslu and Annapurna Massif and once reach the Pokhara valley, sightseeing tour in Pokhara with our guide in such a interesting places like as Davi's Fall, Gupteswor Mahadev Cave, Tibetan Refugee Camp and boating on Phewa Lake for an hour including visit of Tal Barahi Temple in the middle of the lake. Late afternoon, drive from Pokhara to Sarangkot for Sunset View above the high Himalayan Range and stunning view of Annapurna Range, Dhaulagiri Range, Machhapuchhre and other snow-capped mountains as well as Pokhara Valley. Stay overnight at Hotel in Sarangkot.

Day 3: Hike to View Tower for Sunrise
Early in the morning, hike to View Tower for Sunrise View over the Annapurna Massif and other high mountains. Enjoy with majestic view of Annapurna Range, Machhapuchhre, Manaslu, Dhaulagiri Range and scenic Pokhara Valley. Back to Hotel and have a breakfast. After breakfast, preparing for the Paragliding from Sarangkot to Pokhara Valley for an hour flight. Once you are landed from Paragliding and transfer to Hotel. Late afternoon, again our guide will bring you in other interesting places like as Mahendra Cave, Chamero (Bat) Cave, Seti River George and Bindabasini Temple by private car and stay overnight at Hotel.

Day 4: Morning Hike to World Peace Stupa and afternoon fly back to Kathmandu,
In the morning after breakfast, we will go to world peace stupa by car. We can see panoramic view of high Himalayan range from Manaslu to Dhaulagiri range including Machhapuchhre and Annapurna Massif as well as scenic Pokhara Valley and Phewa Lake. Then, we will walk down to Phewa Lake through the forest which takes about 1 hour and take a boat to cross a Phewa Lake passing the small Island where Temple Barahi is situated middle of the Lake. Afternoon transfer to airport, and then fly back to Kathmandu. Our car will be ready to pick up in the airport and transfer to Hotel. Overnight at 4 star hotel in Kathmandu.

Day 5: Full Day Guided Sightseeing Tour in Kathmandu Valley by private van.
After brekafast in the hotel, Drive to Swayambhunath Stupa which is very close form the centre of Kathmandu. It takes some minutes to be there. This Temple is also known as Monkey Temple which is considered to be self made Stupa. Then visit to Boudhanath Stupa: the biggest stupa in Nepal and one of the bigger stupa in the world. You can basically experience Tibetan Buddhism, culture and way of life in Boudhanath Area. Boudhanath area is the authentic place to buy Tibetan stuffs. Again you will be visit Pashupatinath Temple and it is one of the most sacred temples in the entire Hindu world. It is a sacred place where Hindus come to die and to be cremated. The temple of Pashupatinath is a large double roofed, gilt pagoda, decorated with brass, the gateway is plated with silver. There are images of Shiva along with other statues, shrines and temples dedicated to other deities in the complex. A circuit of the Pashupati area takes visitors past a sixth-century statue of the Buddha, an eight-century statue of Brahma the creator and numerous other temples. There are rows of Shiva shrines and Hindu pilgrims from all over south Asia offering ceremonies to worship Shiva, the Lord of Destruction. Overnight at 4 star hotel in Kathmandu.

Day 6: Full Day Guided Sightseeing Tour in Bhaktapur and Patan Durbar square by private van
After breakfast, we are going to visit two historical monuments which represent early and late medieval history, architecture, culture and religion. Bhaktapur Durbar square is an ancient newari city, 13 kilometers far from Kathmandu stores numbers of Hindu temples, 55 windowed medieval durbar and offers you various examples of metal smith and wooden craft along with the opportunity of exploring traditional pottery work to the another corner. Patan durbar square is equally important which represents late medieval history, Culture and architecture. Overnight at 4 star hotel in Kathmandu.

Day 7: Final Departure from Kathmandu
Your trip will come to an end today after breakfast. Your leader will be on hand to advise and assist with your onward travel arrangements and transfer to Kathmandu Tribhuvan International Airport by our private van around 3 hours before your flight schedule and flight back to your home/other travel destination.

Join with us on a Sarangkot Sunrise & Sundset View Tour Tour Including one hour Paragliding in 2022/2023.

Important: In case of emergency during the trip, Helicopter will be arranged by Swiss Family Treks & Expedition GmbH. The charges must be paid by the clients themselves. 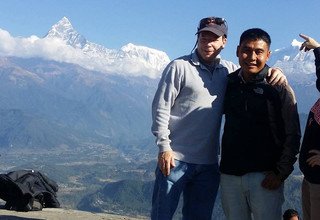 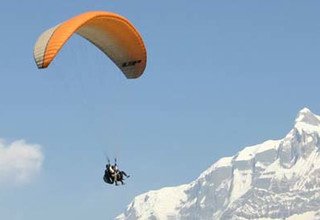 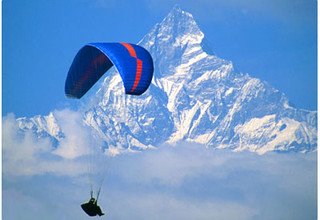 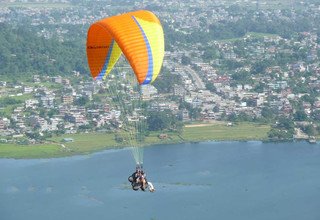 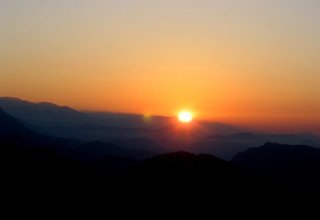 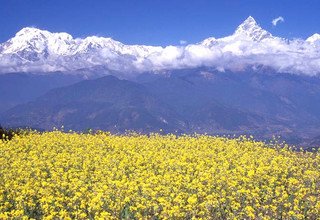 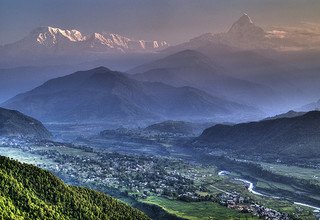 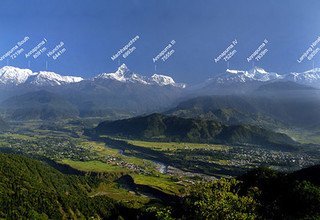 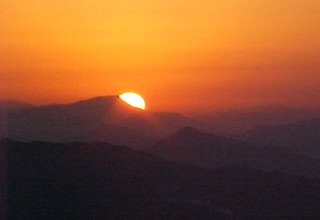 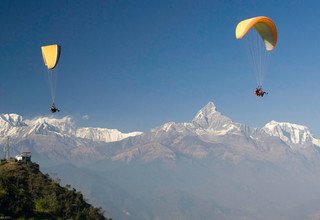 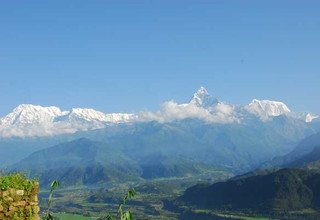 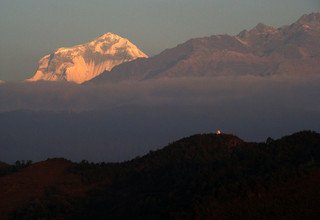