Tsum Valley Trek was opened for trekking in 2008 and there is a little information available on the area. Tsum Valley Trek Nepal is a sacred Himalayan Budhhist pilgrimage valley situated in northern Gorkha, Nepal. Literally “Tsum” means vivid against the majestic backdrop of the Ganesh Himal, Sringi Himal and Boudha Ranges, this serene Himalayan valley is rich in ancient art, culture and religion. The local people are mostly of Tibetan origin and speak unique dialect. Tsum Valley Trekking Trails are strewn with artistic Chortens and lined with Mani walls made of thousands of stone slabs carved with drawings of deities and inscribed with prayers. The famous Kyimu Lung, a pilgrimage circuit in the central Trans-Himalaya, is well known for its center of learning and meditation. This circuit traverses the Tsum Valley, the Manaslu area in Nepal, and southern parts of Tibet. The Tsum Valley has long history of Buddhism. The Buddhist saint Milarepa is believed to be meditated in the caves of these mountains. Traditionally, the valley was a culturally distinct geographical called “Tsum Tso Chuksum”, which means thirteen provinces ruled as a single territory. The ancient remains of the Tsum Kingdom are still visible today. Due to its remoteness and inaccessibility, this sacred valley and its people have been bypassed by mainstream development for centuries. As a result, the unique culture of this valley has remained intact. The valley is drained by the Shear Khola, which originates from the western glacier of Ganesh Himal and east and southern glaciers of Sringi Himal and meets the Budhi Gandaki at Nyak. The Tsum Valley is uniquely rich in wildlife, especially the Himalayan Thar and Blue Sheep which congregates in herds of 50 to 200. Hunting, fishing is not permitted in the Tsum Valley. The Tsum Valley Trekking in Nepal also boasts some unique and historic monasteries, including Rachen Gompa and Mu Gompa, which lie on a pretty plateau nestled in the lap of the valley and Gompa Lungdang, situated at the base of a conical hill against the main slope of Ganesh Himal.
People and Religion in Tsum Valley
The local people are mostly of Tibetan origin and speak a unique dialect. Even these days, some families practice polyandry (or having more than one husband at a time). These families have been found to be well managed and wealthier than other families. A long history of Buddhism can be seen. The Buddhist saint named Milarepa is believed to have meditated in a cave in these mountains. It is believed that there is a favorable ambience for fortunate events in this region. The people in Tsum have a strong faith in Buddhism. They pray to Buddha, Guru Rinpoche (Padmasambhava) and some bodhisattvas. They install Prayer Flags, Khata, or Mani walls, burn butter lamps in monasteries and believe in the reincarnation of Lamas. The histories and way of life of supernatural entities and stories about them are well-known. Nevertheless Prayer Flags, Khata, or Mani walls are installed and ritual burning of juniper is performed to purify an area against such supernatural entities. The people of Tsum perform numerous rituals and festivals against devil entities. However, the slaughtering of animals on an altar to honor deities does not occur. A few laymen and Lamas practice some special rites to exorcise evil factors. Local people practice mainly two types of astrology “Black” and “White” for the determination of auspicious days.

Festival in Tsum Valley
Numerous festivals, several mask dances and rituals are celebrated throughout the year in the Tsum Valley preserving the century old practices. Loshar:- LO means year and SHAR means new, the Tibetan word meant of Happy Loshar (Tibetan New Year) celebrated according to the Tibetan Lunar Calendar offering large quantities of incense to appease the local spirits, deities and protectors. Tsumbas of the lower Tsum Valley celebrate Loshar earlier than the upper Tsum people. Dhachyang (The horse Festival):-The second most important festival of this region is celebrated on a slightly different date than the normal Dec/Jan. Committed to the welfare of the people, it is celebrated by the active male participants holding horse races leaving women to join in the evening for dancing and singing. Happy Saka Dawa:- The full moon day of Saka Dawa commemorates Lord Buddha's birth, enlightenment, and Parinirvana. As cited by Lama Zopa Rinpoche in the Vinaya text Treasure of Quotations and Logic, virtuous actions done on this day (fall in May) are multiplied one hundred million times. Rituals are performed at local monasteries and nunneries and the devotees take fasting during this time. Faning:- In mid-August with nutritious and yummy, this festival commemorates the attainment of internal energy from any food, including water.

Highlights of the Trek:

Facts of the Trek 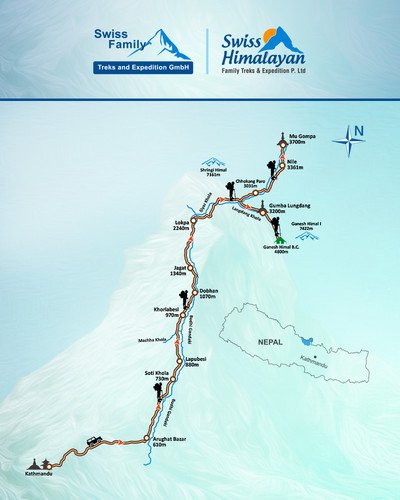 from 2.105 USD / Days: 22 / Difficulty: 4 of 5 (Strenuous)
Tsum Valley and Manaslu Trek traverse Larkya-La Pass is one of the most thrilling treks in Nepal that takes to the remotest and pristine areas of Tsum Valley and Manaslu region which have only been recently opened for trekking. While trekking in Tsum Valley allows you to understand the practices of Tibetan Buddhism and also to enjoy the panoramic view of Ganesh Himal range, trekking in...

from 1.930 USD / Days: 17 / Difficulty: 4 of 5 (Strenuous)
Manaslu Circuit Trek is one of those classical treks where you get to experience the grandeur of spectacular Himalayan ranges and appealing natural beauty amid remoteness. Manaslu Circuit Trek Nepal is one of the less crowded treks, which makes it more exclusive and unspoiled for trekkers seeking thrill in quieter routes. This trek takes you to the base of Manaslu (8156m), the 8th highest...

from 3.315 USD / Days: 22 / Difficulty: 4 of 5 (Strenuous)
Rupina La Pass and Tsum Valley Trek is the peaceful gem of a trekking adventure that takes you deep into the Manaslu region and offers unparalleled natural riches. The trek glides on the lesser visited trails promising mind-blowing adventure and glorious views. You will get to witness breath-taking views of mountains like Ganesh Himal (7,422 m), Mt. Himalchuli (7,853 m), Mt. Manaslu (8,163 m),...

from 3.925 USD / Days: 29 / Difficulty: 4 of 5 (Strenuous)
Introduction to Tsum Valley Trek Tsum Valley was a restricted area until it was opened for trekking in 2008 and there is a little information available on the area. The Tsum Valley is a sacred Himalayan Budhhist pilgrimage valley situated in northern Gorkha, Nepal. Literally “Tsum” means vivid against the majestic backdrop of the Ganesh Himal, Sringi Himal and Boudha Ranges, this serene...

Day 1: Arrival in Kathmandu 1338m
Arrival in Kathmandu Tribhuvan International Airport and you will be met at the airport by our representative who will be waiting with a Swiss Family Treks sign outside the terminal and transfer to Hotel by private car. Welcome drink and after you settle into the hotel there will be a group briefing with your tour leader. He will discuss the trek details and co-ordinate any last minute arrangements. Overnight at 4-star hotel in Kathmandu.
Day 2: Full Day Guided Sightseeing Tour in Kathmandu Valley by private van
After brekafast in the hotel, Drive to Swayambhunath Stupa which is very close form the centre of Kathmandu. It takes some minutes to be there. This Temple is also known as Monkey Temple which is considered to be self made Stupa. Then visit to Boudhanath Stupa: the biggest stupa in Nepal and one of the bigger stupa in the world. You can basically experience Tibetan Buddhism, culture and way of life in Boudhanath Area. Boudhanath area is the authentic place to buy Tibetan stuffs. Again you will be visit Pashupatinath Temple and it is one of the most sacred temples in the entire Hindu world. It is a sacred place where Hindus come to die and to be cremated. The temple of Pashupatinath is a large double roofed, gilt pagoda, decorated with brass, the gateway is plated with silver. There are images of Shiva along with other statues, shrines and temples dedicated to other deities in the complex. A circuit of the Pashupati area takes visitors past a sixth-century statue of the Buddha, an eight-century statue of Brahma the creator and numerous other temples. There are rows of Shiva shrines and Hindu pilgrims from all over south Asia offering ceremonies to worship Shiva, the Lord of Destruction. Overnight at 4-star hotel in Kathmandu.
Day 3: Drive from Kathmandu to Soti Khola 710m/5-6 hours by land cruiser
A westward picturesque ride along the Prithvi Highway, via the lush hills, leads us to Malekhu. Then, driving past Dhading Besi, the road turns curvy and leads us uphill to Gola Bhanjyang where enthralling views of snow-capped mountain peaks can be seen. The road then goes downhill to cross Ankhu Khola, and later, at Arughat, we meet Budhi Gandaki River. A further drive up the west bank of Budhi Gandaki River finally brings us to Soti Khola. Overnight at a lodge in Soti Khola.

Day 4: Trek from Soti Khola to Khorlabesi 920m/5-6 hours
After having our breakfast, we move on the track that ascends slowly through lovely Sal forests. It then goes over forested and attached ridges past many waterfalls. It later descends to pass rice paddies before ascending to the attractive Gurung village of Lapubesi (885m). After passing a suspension bridge at the remarkable Nauli Khola falls, the gorge opens out and the track drops onto stony banks along the Budhi Gandaki River before ascending to the village of Machha Khola and continue trek until reaching Khorlabesi. Overnight at a lodge in Khorlabesi.


Our Tsum Valley Trek Package Cost doesn't include;
* Any meals (Lunch and Dinner) in Kathmandu other than breakfast.
* Travel insurance.
* International air fare to and from Nepal.
* Nepal Tourist Visa fee.
* Items and expenses of personal nature.
* Any kind of alcoholic drinks, cold drinks, laundry, phone call, internet.
* Personal Trekking Equipment like sleeping bags, jackets (can all be hired in KTM).
* Emergency Evacuation (Helicopter Rescue).
* Any costs which arise due to a change of the itinerary, because of landslides, political disturbance, and strikes etc.
* Any other costs whatsoever, that is not mentioned in the cost included.
* Horse renting and additional porters due to natural calamities during the trek.
* Tips for guide, porters, driver... 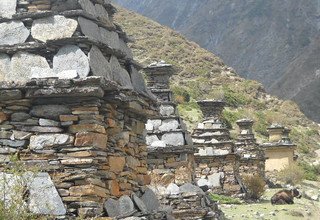 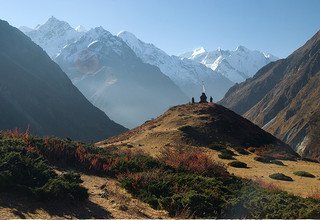 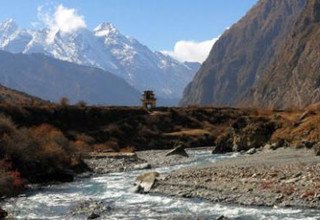 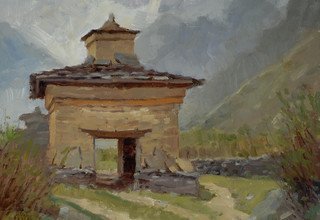 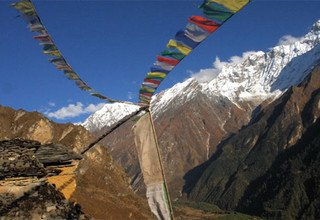 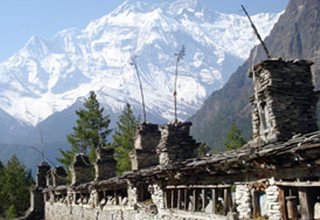 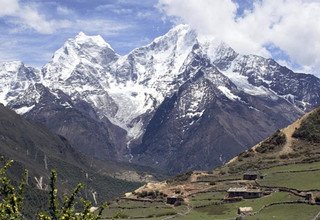 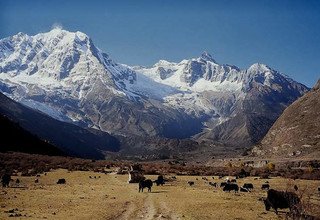 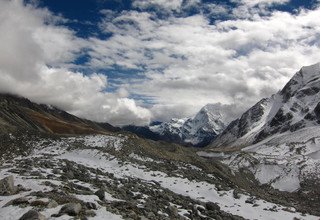 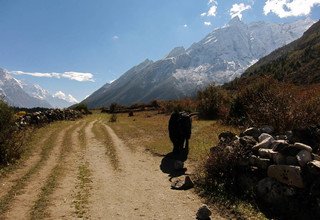 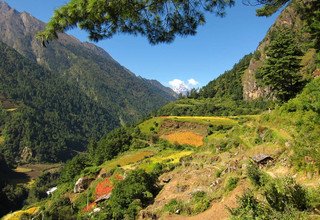 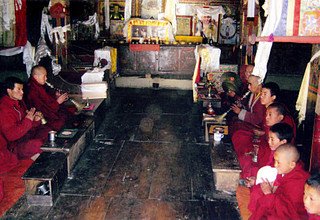 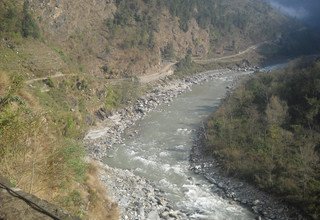 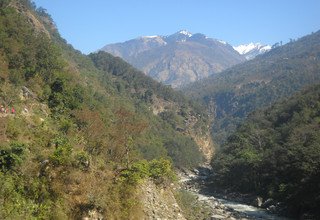 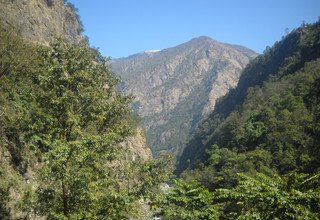 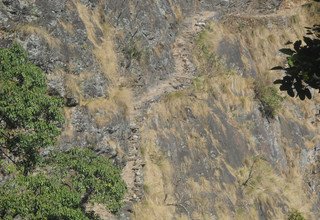 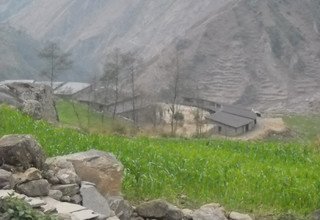 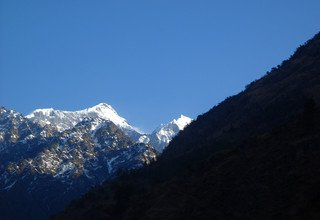 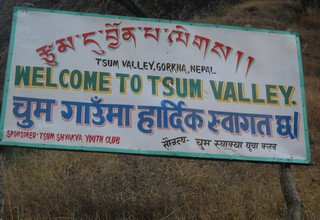 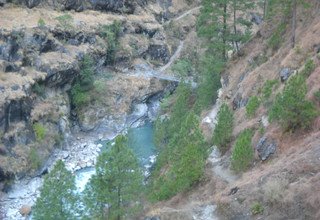 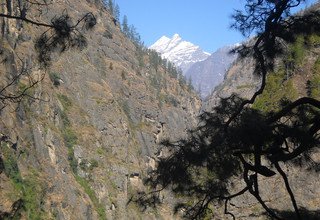 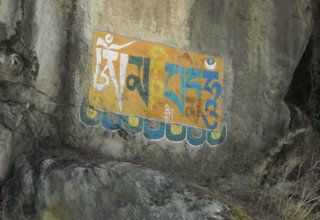 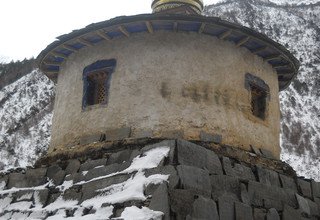 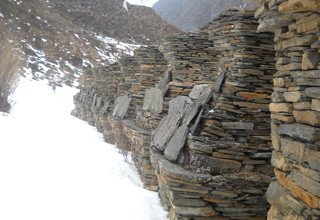 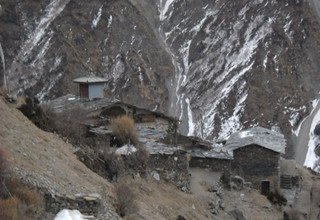 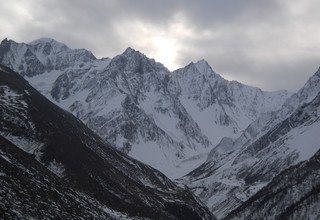 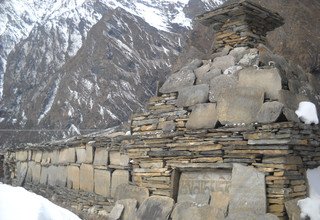 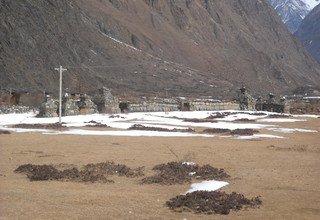