Horse Riding Trek to Everest Base Camp: Everything you need to know the epic journey

Preparation and Riding Experience
One doesn’t need any prior horse riding experience to undertake this trek. But any riding experience comes in handy during this trip. The Tibetan horses are well-tamed by the locals. Your local guide will take all the necessary precautions and follow the safety guidelines. The local horses are sure-footed, which makes it easy for them to trot on the rugged mountainous terrain. They are well used to living in high altitudes. For first-time trekkers, it can be a thrilling experience. While other trekkers will walk on foot, those riding the horses can enjoy the entire trek to explore the beautiful sceneries. Prior training for high altitude trek and endurance-building exercises can help the trekkers cope with high altitude risks such as Acute Mountain Sickness (AMS).

Views and Mountain Scenery
The Horse Riding Trek to Everest Base Camp offers the spectacular scenery of mountains and glaciers. Home to two of the highest peaks on Earth, the Everest Region boasts many eight-thousanders and other smaller peaks. Some of the majestic peaks visible during the trek are Everest (8848m), Lhotse (8516m), Makalu (8485m), Cho Oyu (8188m), Nuptse (7861m), Ama Dablam (6,812m), Nangkartshang Peak, Kongde Ri, and Lobuche Peak. While Mt. Everest remains visible at different trek points, one wouldn't get to see it at Everest Base Camp. Trek to Kala Patthar (5643m) to view the majestic Everest along with other Himalayan vistas. The trail above 4,000 meters offers a serene journey along the breathtaking Lobuche Glacier, Khumbu Glacier, and Khumbu Icefall. Mani walls with Buddhist graffiti, Buddhist Stupas, and yak pastures are other highlights of the trek.

People, Culture and Wildlife
The Sherpa people predominantly inhabit the Everest Region. Sherpa is an ethnic tribe endemic to Northern Nepal. The Everest Region alone is home to 25,000 Sherpas. Used to living in high-altitudinal belts, they are the best mountaineering guides and navigators. One can explore the ethnic Sherpa culture, cuisines, lifestyles, and traditions during this trek. The people are the adherents of Tibetan Buddhism. They celebrate festivals such as Mani Rimdu and Losar in Tibetan style. One can try local cuisines such as Tsampa bread, Thenduk, Thukpa, and Butter Tea during this trek. The entire Everest trail lies inside Sagarmatha National Park. The first Himalayan National Park inscribed into UNESCO World Heritage Site is home to Himalayan wildlife, including Himalayan Pheasant (Danphe), Red Panda, snow leopard, musk deer, and Himalayan Black bear.

Getting there and back
One can reach the Everest Region either via a short flight to Lukla or by a long foot journey through Jiri. The short flight to Lukla is one of the most opted modes of commute to get in and out of the Khumbu Valley. Many major domestic airlines such as Buddha Air, Sita Air, Tara Air, etc. offer flight from Kathmandu to Lukla, with an occasional stop-over at Ramechhap. The small airplane can easily land on the mountainous turf in Lukla Airport. Once at Lukla, trekkers often trek to the Everest Base Camp or take the unique mode of commute, such as Tibetan Pony. Another mode of commute to the Everest Region is a chartered helicopter ride.

When to go
Although Everest Region remains accessible throughout the year, the prime seasons of trekking include spring and autumn. Over 80% of tourists visit the Everest Region during spring and autumn. Spring season spans from late March until June while the autumn season begins in mid-September and ends in November. These two seasons guarantee the best weather, over 90% accessibility, clear and bright day, and unobstructed scenery. Although infamous for frequent flight canceling, monsoon (July and August) often see few visitors. Winter sees many tourists who often visit the place to experience snow trekking. The entire trail above 2,500 meters looks stunningly beautiful. 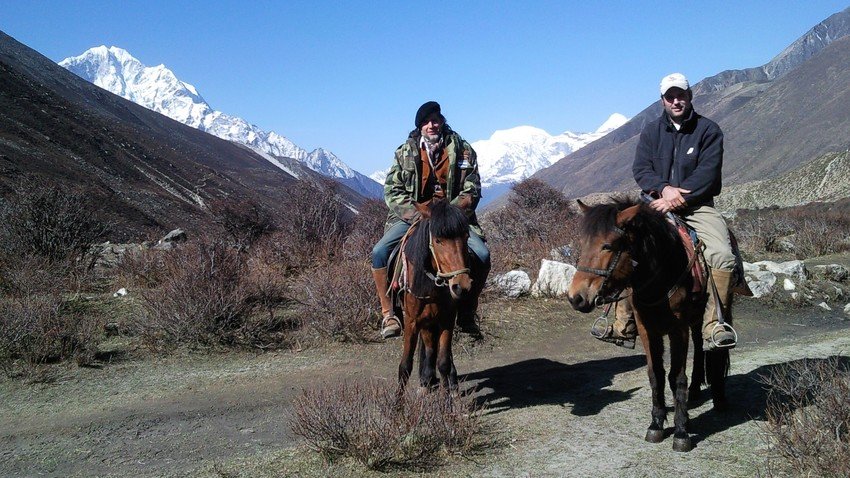 Accommodation
Everest Region is home to hundreds of teahouses and lodges equipped with the finest amenities. Enjoy the nicest accommodations ranging from budget teahouses to luxury hotels. The rooms often consist of at least two single beds with an option to book a group room with multiple beds.

The quality of the teahouse may depend on the altitude and the budget of the tourist. Many teahouses at lower altitudes such as Lukla and Namche Bazaar offer the finest lodges with private bathrooms, hot shower, charging facilities, electricity, electric blanket, western toilet, Wi-Fi, etc. On the other hand, lodges located at higher altitudes such as Dingboche (4410m) may only offer basic facilities.

The highest point of the trek lies at Kala Patthar that accounts for a short hike from Gorakshep. One can find various trek routes inside Khumbu valley, ranging from Gokyo Lakes to Three-High Passes. The standard Everest Base Camp Trail consists of teahouses within few kilometers, making the entire trek an easy experience. One can make side trips to Syangboche Airport, Kunde, Khumjung Monastery, Nagarjuna Hill, and Nangkartshang Peak. Upon reaching Everest Base Camp, trekkers take the usual route to get back to Lukla.

Amateur and aged trekkers often get weak due to fatigue and lack of oxygen during the Everest Base Camp Trek. They are often advised to take enough breaks between the journeys and maintain a balanced diet with enough fluid intake.

An altitude gain of no more than 600 meters per day ensures enough time for acclimatization.

Tibetan Horses
Although known as horses, Tibetan pony comprises of different horse breeds native to Tibet. These horses derive from Mongolian stock or mountain pony endemic to Tibetan plateau, Mongolia, and Northern Nepal. These domesticated breeds enjoy considerable strength and endurance for their smaller stature. The sure-footedness and resilience make these ponies the most-reliable transport in the rugged mountainous landscapes. They are often referred to as “wind horses” by the locals because they can run as fast as the wind. These crossbred horses inhabit the Everest Region, where the local Sherpa use them to transport good and tourists. Over time, Yaks replaced them as “beasts of burden.” However, few locals still prefer to use horses to commute from one place to another.

The guides are often hired from target destinations such as the Everest Region as they have greater knowledge about the locality, local culture, people, and customs. They act as the liaison between the tourists and the locals. According to the group size, the guide is often accompanied by an assistant guide. A porter carries luggage for two trekkers at a time, where each porter can carry up to 20kg - 30kg.

The advantage of booking the trip with a licensed operator is that one can enjoy the service of guides who have been in the trade for over 10 years. They can speak many languages, provide first-aid assistance, conduct search, and rescue, and deal with the locals.

Conclusion
Overall, horse riding trek to Everest Base Camp is a fulfilling outdoor experience. The trek made easy by Tibetan horses offers a great opportunity to witness some of the highest mountains on Earth, such as Everest, Lhotse, Makalu, Cho Oyu, and Thamserku. With layover at almost every major stop, trekkers can enjoy witnessing the local culture, lifestyle, customs, and traditions. The trip highlights the visit to the serene Khumjung Monastery and Tengboche Monastery. Khumjung monastery is home to the Yeti-scalp preserved inside a glass jar while the Tengboche monastery is the largest and the highest in the entire Khumbu region.