There is perhaps no other country so rich in the mountains as Nepal. Moreover, besides being numerous, the peaks of the Nepal Himalaya are also outstandingly high; apart from Everest and Kanchenjunga (the world's tallest and third-tallest peaks respectively), there are six peaks over 26,000 ft., fourteen over 5,000 ft., and a host of what might be called slightly stunted giants of 20,000 ft. and up.

With a plethora of snowy peaks, Nepal has become one of the best destinations for trekking and mountaineering. Visited by trekkers from all across the world every year, Nepal presents an unforgettable natural environment for adventurers.

As such, trekking and peak climbing in Nepal is very popular. The country has numerous peaks that are suitable for climbs, with many often included as destinations in most base camp trekking journeys. Among the many climbable peaks, the Island Peak is one of the most renowned.

Island Peak Climbing
Also known as Imja Tse, the Island Peak has an altitude of 6,160 meters. Named as the "Island Peak" because of the peak's resemblance of an island in a sea of ice, the Imja Tse is one of the most popular climbable peaks in the country. It was first ascended in 1953 by a British Team who were preparing for an Everest Expedition.

Island Peak is part of the southern ridge of Lhotse Shar. The mainland of the Island Peak forms a semicircle of cliffs that rise to the north of the Nuptse and Lhotse summits. East of Imja Tse lies Mount Makalu, while to its south lies the Barutse Peak, the Amphu Himal, and the Ama Dablam Peak.

From the summit of the peak, the gorgeous views of the Everest Region’s Himalayan giants like Mount Everest, Mount Makalu, Mount Ama Dablam, Mount Nuptse and many more are stunningly majestic. 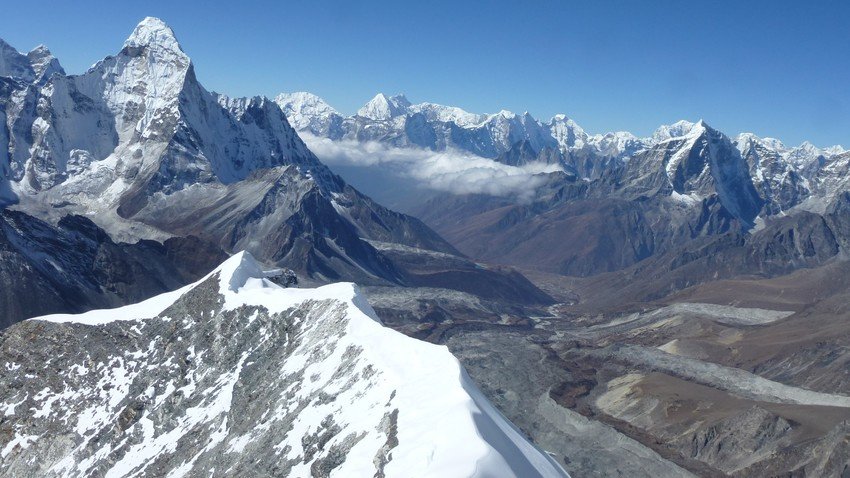 Everest Base Camp
The base camp of the world's tallest mountain peak is situated at an altitude of 17,600 ft. The journey to the base camp starts from Lukla and the path traverses along the Imja and Dudh Koshi River valleys, through many ethnic settlements and villages to finally conclude at the base camp.

Likewise, the Island Peak Climbing, for the initial part of the journey, also follows much the same route as the Everest Base Camp Trek. Additionally, the trail reaches the Chhukung valley and winds towards Island Peak, taking trekkers to prominent destinations like Namche Bazaar, the Pheriche valley, and Lobuche village among many others.

The next destination is Namche Bazaar. A 6-hour trek from Phakding includes the pathway meandering through the Sagarmatha National Park towards the famous Himalayan town of Namche. It is also where trekkers stay for an extra day for acclimatization.

From Namche, the path then leads towards Tengboche. It is another 5 to 6 hours of trekking towards Tengboche, situated at an altitude of 3,867 meters. The village is famous for its monastery and amazing views of the Everest Peaks.

Likewise, from Tengboche, the next destination is Pheriche, reached by traversing on the trail that crosses the Imja River and passes through the Pangboche ridge. Pheriche is also another site for acclimatization as substantial elevation is achieved.

After Pheriche, the next stop is the village of Lobuche. The trail gently climbs through the trans-Himalayan landscape that is mostly moss-covered woodlands and vast pastures with donkey caravans and yaks.

It is a steep climb south from the valley on a winding path below the southern flank of the moraine from the Lhotse Glacier towards Island Peak High Camp. The trek towards the summit of the peak then occurs very early in the morning when it is still dark. It takes about 10 to 11 hours of steady up-and-downhill trekking to reach the summit and to trek back down. 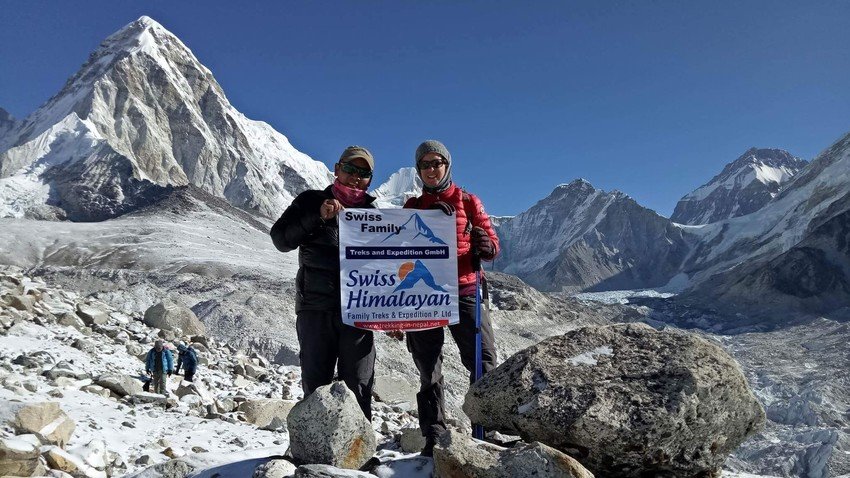 Photo: On the way to Everest Base Camp

Climbing Permit
Island Peaks permit fee costs USD 250 per person. An additional USD 500 deposit is also required to ensure compliance with garbage regulations. Nepal Mountaineering Association has categorized the permit fees for climbable peaks into different groups. Island Peak falls under the category Group B. The cost is also varied based on the season. The permit cost for spring (March, May, and April) is $ 250, for the autumn (September, October, and November) the fee is $ 125.

Lukla Flight Cancellation and Weather
Lukla Flight can be canceled or delayed during the summer and winter due to bad weather conditions. Summertime experiences rainfall and the winter months can experience snowfall, both of which present high flight cancellation chances due to poor visibility.

Spring and autumn months are suitable for the trip because they present good visibility and few cancellation chances of the Lukla Flight to/from Kathmandu. Nevertheless, while trekking, even during the trekking seasons of spring and autumn, it is a good option to have an extra contingency day for unexpected cases of flight cancellations and delays.

Equipments Required
Along with good physical fitness and a strong physical capability, Peak Climbing also requires certain essential equipments. The right Peak Climbing equipments are very important and it is also necessary to be familiar with them for a good and safe peak climbing journey. Climbing peaks require additional equipments compared to trekking trips. Here are some equipments used during peak climbing-
•    Crampons and Climbing Boot
Mainly used for ice climbing, crampons can also be used for other situations when dealing with snow and ice, like walking on ice-fields, climbing on glaciers or crossing snow-fields. They are also used for scaling ice rocks. Crampons with semi-rigid construction with horizontal frames are a suitable choice for Island Peak.
•    Tape Slings and Figure 8
Designed to attach climbers to anchors, Tape Slings create equalized anchor systems. They are used for clipping into the ropes and into gears to reduce drag.
•    Ice Axe and Helmet
One of the most important Peak Climbing equipment, the Ice Axe is used primarily during ascending and descending on snow and ice conditions. It can also be used as an improvised anchor.
•    Harness
Used for securing the climber to the rope or an anchor, harnesses are essential to peak climbing equipments required for a well-fitted suit to avoid discomfort in the upper thigh and groin area. A full-body harness is generally used for peak climbing.
•    Ice Screw
An ice screw is used to tackle steep surfaces. It can be used as a running belay or as an anchor in the ice.
•    Screw-gate Carabiners
Screw-gate Carabiners are widely used in safety-critical systems like peak climbing. Carabiners go hand in hand with anything that involves rope-intensive ascends. 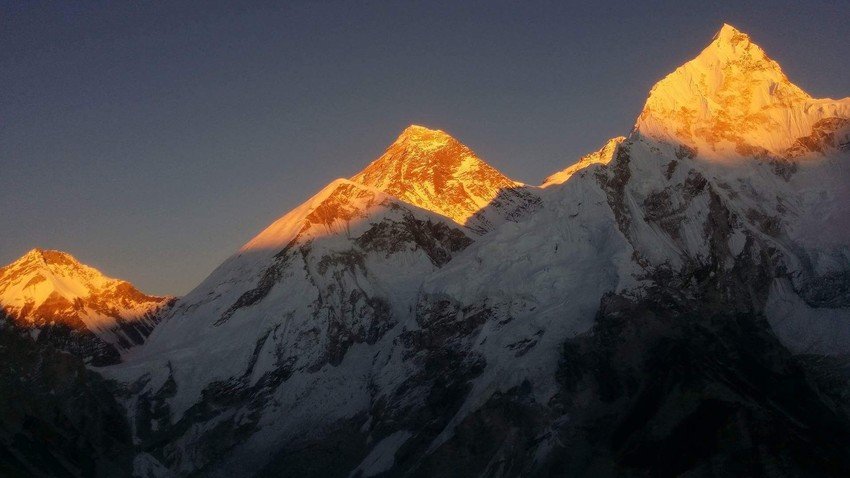 Physical Fitness Required for Island Peak Climbing
Island Peak Climbing requires going up the headwall of ice and snow in a 60 to 70-degree angle terrain. Although Island Peak is comparatively a moderately difficult peak to summit, it still requires a great deal of prior training. Physical fitness is a must to successfully attempt this trip.

Before the journey, preferably a month or so before, getting in shape by doing regular cardiovascular exercises greatly helps. Doing regular cardio exercises helps to build stamina and boost energy. With proper acclimatization and a steady journey, it isn't too difficult to achieve.

However, depending on where the star of the prior training begins, the focus should be given on increasing the training sessions from 30 minutes to 50 minutes to 90 minutes over a 12 to 20 week period and 4 or 5 times a week.

Frequently Asked Questions (FAQs)
1.    How does Island Peak compare with Everest or other 8,000 meter peaks?
-  Island Peak is significantly simpler, both in terms of altitude and duration. Thus, it is a good peak to begin the first mountaineering adventure.
2.    Is the Island Peak Climb dangerous?
- Summiting Island Peak can be like any other mountain summit trip. However, skill sets should be acquired in climbing with crampons, blizzard conditions and snow camping.
3.    How did you communicate back home?
- Most of the teahouses offer Wi-Fi throughout the Everest Trek at about $5 for 1GB of data. Satellite Phones are used for remote locations where connections are sparse and also on the summit.
4.    Do you need supplemental oxygen?
- No, supplemental oxygen is usually only used over 23,000 Feet or 8,000-meter mountains.

Conclusion
Island Peak is a great choice for beginners who are looking to summit a Himalaya. Although the climb has its difficulties, the Island Peak Climb is comparatively moderate when it comes to trekking to the summit. Also, the journey also includes visiting the base camp of Everest and many famous destinations and settlements of Khumbu. It is perfect for adventurers who are looking for a thrilling unforgettable trip.