Annapurna Base Camp- Trekking to the Heart of Annapurna

A country blessed with an ivory tapestry of the mighty Himalayas- Nepal is a land of wonders. From the pale arid desert-like terrains of Dolpo and Mustang to the snowy vastness of the majestic Himalayas up north, Nepal's many virtues contribute elegantly to the country's enigmatic environments.

As such, Trekking in Nepal is considered as one of the most beautiful adventures in the world. Thousands of trekkers from all parts of the world visit Nepal for treks and hikes. Not only that, but the cultural resplendence is also a major facet of Nepal. The attributes of multiculturalism are manifested in many forms like music, dances, costumes, and festivals that branch out throughout the country.

Among the many trekking destinations in Nepal, the Annapurna region is one of the most famous. Likewise, the Annapurna Base Camp Trek is a perfect blend of all of the best aspects that the nation presents. It is perhaps one of the most appealing and naturally rewarding treks in Nepal, presenting trekkers with the pristine Annapurna valley embedded with amazing features of multicultural dynamics amidst the flanks of the mighty Mount Annapurna massif.

With almost half of the visitors who come to Nepal for trekking visiting the Annapurna region, the base camp trekking journey to Annapurna is among the most popular and sought-after trips.

Trekking in the Annapurna region is particularly feasible with good communications and safety. It draws on more than 60% of the country's total trekkers annually, and over the years- tourism has managed to be firmly established as one of the most important and fast-developing sectors of the region's local economy.

The Annapurna region has managed to become internationally well-known as well, both for its formidable mountain peaks and its natural beauty, largely due to its tea-houses, lodges, guesthouses and hundreds of other subsidiary services catering to tourism.

Popular treks in this region take place on well-beaten tracks, along with many choices for off-the-beaten-track destinations as well. It is a perfect mix of natural beguiles and cultural riches. 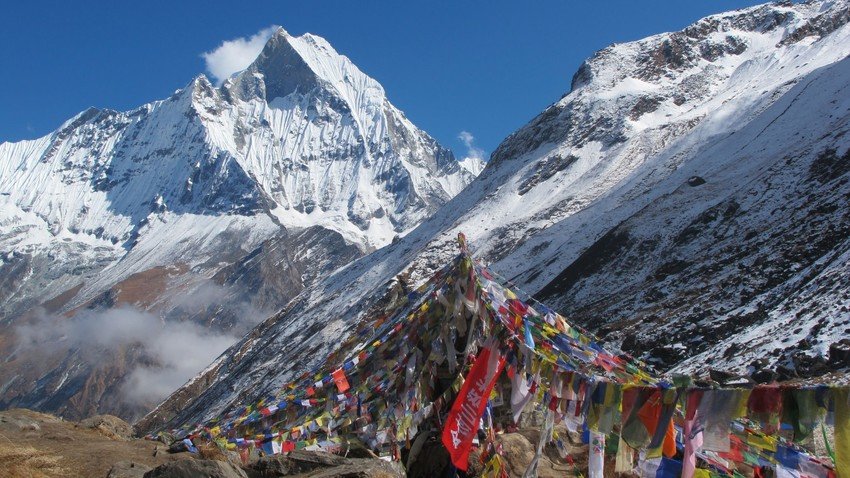 Annapurna Base Camp Trek
Like most Nepal Treks, the Annapurna Base Camp Trek is ranked at the top amongst unforgettable adventures where the Himalayas can be experienced majestically. The journey takes trekkers meandering through many ethnic Gurung and Magar villages and settlements, presenting trekkers a chance to enjoy Nepal's Himalayan way of life.

The journey stretches from sub-tropical lowlands with lush temperate rhododendron forests in the south to dry alpine steppe environments in the north.  The trek is dominated by mountain ranges and Himalayan peaks of the Annapurna massif, the Nilgiri Himal, the Tilicho Peak, Hiunchuli, Machhapuchhre, Gangapurna, Lamjung Himal, the Tukuche Peak and many more.

Major Highlights of the Annapurna Base Camp Trek

The variation in altitude and topography, along with verdant forest cover, provides habitats to many animal species that can be encountered during the ABC Trek. Particularly thanks to ACAP- the Annapurna Conservation Area Project, the region has managed to reach a sustainable position regarding tourism and trekking.

Launched in 1986, ACAP is the first conserved area and the largest protected area in Nepal. Exotic and elusive animals like the Himalayan black bear, the Himalayan Thar, the barking deer, Ghorals, the blue sheep, Musk deer, Red Pandas, and Snow leopards are some that occupy the woodlands through which the trail pass through.

Moreover, the woodlands also provide excellent habitats for a wide variety of spring and autumn birds migrating from India and China as well as from other regions.

The Annapurna Base Camp Trek presents gorgeous views of the mighty Annapurna massif and its many neighboring peaks. Prominent mountain peaks like the Machhapuchhre and the Nilgiri, along with the massif of the Annapurna Himal grace the distant skyline in a spectacular fashion from the very beginning of the trek. Similarly, the vantage point of Poon Hill presents the entire panorama of the Annapurna Himal laid out like upholstery.

ABC Trek is a great opportunity to enjoy the cultural diversity of the region. The cultural diaspora consists of people from Gurung and Magar ancestry. Gurung and Magar ethnic groups dominate in the south whereas Thakali, Manange and Loba people are more dominant in the north. Each of these groups speaks their dialect and have their own unique culture and traditions.

Trekkers can experience the culture of the Gurungs, Thakalis and the Bhotias in the highlands during the trip, and other minor group cultures in the lowlands. It is a common sight to come across herds of domesticated cattle heading off to pastures while undergoing the ABC Trek. Ethnic groups showcase their dexterity in traditional costumes and folk dance and folk songs during celebrations and festivities.

The day and night time temperatures are quite suitable, with it being not too hot or too cold. Good visibility without rain is one of the major factors why they are the best seasons to do the trek. Comparatively, they also result in fewer flight cancellations.

During spring, the average day-time temperature at lower altitudes can range from 10°C to 12°C. However, the colder it gets the higher up you go. When you gain an altitude of 4,000 meters, cold temperatures in the morning and the evenings can be experienced.

Whenever one is trekking to the mountains, it is important to always be wary of AMS. Maintaining a comfortable pace and not rushing the journey is important. So is being properly acclimatized. 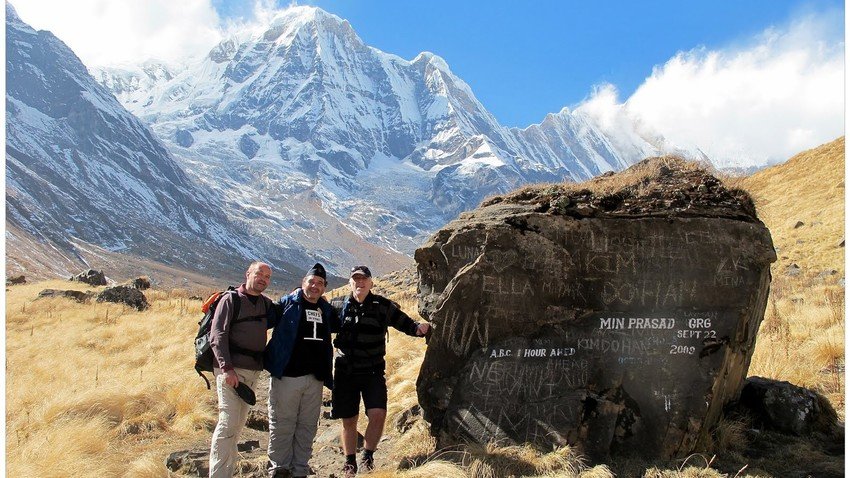 Duration of the Annapurna Base Camp Trek
In general, the ABC Trek lasts for about 10 to 14 days. It starts from the lakeside city of Pokhara. The journey passes through many prominent ethnic villages of the region, like Ulleri, Ghorepani, Tadapani, Dovan, and Deurali among others.

Nepal is blessed with some of the most spectacular Himalayan Rivers in the world. Rafting is a popular adventurous that can be included in the ABC Trek. Rafting on the Trishuli River before arriving in Pokhara can be an option.

A day tour of Pokhara can be adjusted into the ABC Trek journey. It mainly includes visiting the city's natural attractions as well as the city's museums. Likewise, an early trek to Sarangkot is famous among visitors of Pokhara. It presents a panoramic view of the entire Mount Annapurna massif during sunrise. Sarangkot is also a hotspot for paragliding.

Alternate Short Trips in the Annapurna

The region presents many short trips besides the base camp trek. Among them, the Poon Hill Ghandruk Trek is one of the best. It presents trekkers with a chance to enjoy the mountain peaks without going too long arduous trekking journeys. It is also perfect for trekkers who are short on time. Moreover, Ghandruk is also known as "the Switzerland of Nepal", and is a popular place in the Annapurna region.

An alternate trekking route and an off-beaten trip, the Khopra Ridge Trek presents a good alternate choice. The pathway veers away from the popular route and instead meanders towards the Khopra Ridge, a hidden gem of the region that presents thrilling views of the Annapurna valley.

Conclusion
The Annapurna Base Camp Trek is one of the most popular trekking trips in Nepal. It presents many hallmarks and amazing features that are unforgettable. The journey is a great way to enjoy the Annapurna Peaks and to take in the beauty of the landscape.

The journey is easily accessible from Kathmandu and is safe. It is suitable for all people and does not require any previous trekking experience to do. The Annapurna region offers many more highlights as well.

Trekking in the Annapurna region is one of the most dramatic and beautiful experiences in Nepal. It a great way to get into Nepal's diverse beauty and enjoy its many layers of authentic culture, history, religion, and features.