The mesmerizing beauty of this place will indeed captivate your mind and haul you back over and over again. Being one of the most fascinating parts of Nepal, Mustang never fails to bring out the best in our country's geography. This place borders the Tibetan Plateau, followed by a blissful view of the dazzling cliffs including Mt. Dhaulagiri, which is the seventh-highest peak in the world. This colossal valley holds glowing stratified rocks, deep gorges, and arid high altitude deserts.

About Mustang
Mustang is known to be an ancient forbidden kingdom that has been successful in maintaining its Tibetan influenced traditions to date. Even though the people of Mustang live within the geographical boundaries of Nepal, they do have a strong influence from Tibetan culture and religion. This is attributed to the famous Tibetan King, Songtsan Gampo, who had incorporated the people with their Tibetan Empire. Until 1992, the Upper Mustang had stayed isolated from the outside world, being a restricted demilitarized area, making it the most preserved region.

Upper Mustang will take you to a hidden world of the old Buddhist kingdom of Mustang which is also known as 'Lo'. The capital of Upper Mustang, Lo Manthang unveils a square-walled town that is known to be the residence of the king. It is the socio-cultural hub of the original inhabitants of Mustang, known as the Loba people. These people set up their place using stones and mud, whitewashed outside- making it seem more like Tibetan homes. The strategic geography of this place brings tourism, animal husbandry, and trade to bolster the lifestyle of the people.

The trail further north from Kagbeni takes you to Upper Mustang, which has been opened for around fifteen years for non-Nepali trekkers. Even though the trekking restrictions were made flexible, the strict rules and regulations for tourists still linger. The trekkers require a special trekking permit, guided by a government-appointed official. This portion of land lies in the Himalayan rain shadow zone of the Dhaulagiri massif to the south and west, accompanied by the Annapurna range to the north and east. 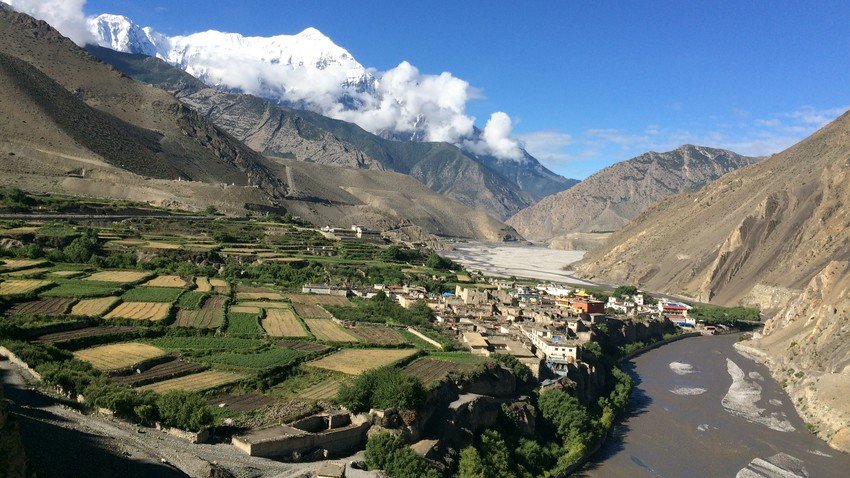 Regardless of the season, this place can be visited all year round, making it one of the popular areas for trekking. Falling in the rain shadow zone has made this a prominent region favorable for trekking even during the monsoons. You will experience occasional rainfall in the upper Kali Gandaki that otherwise stays pretty parched during this season. If other seasons are taken into account, it is extremely chilly in winter, whereas the rest of the year ends with a windy and dusty atmosphere.

Along with the chilling experience of a trans-Himalayan climate that is cool and semi-arid with precipitation, the other prime intention of Upper Mustang Trek is the visit to the old capital, Lo Manthang. The white-washed 6-meter tall walls will depict a whole new world of beautiful prayer wheels and Buddhist shrines, with the virtuous people in the narrow alleyways. Lo Manthang highlights include the King's Palace- a nine-cornered, five-story structure built around 1400. This place is replete with monasteries that are even being restored by art historians.

Originally, there are four major temples; the oldest one being the Jampa Gompa or the Jampa Lhakhang, also known as God House, which was built in the early 15th century. Next up is a huge red assembly hall located just southwest of Jampa Gompa, built in the late 15th century called the Thubchen Gompa. Furthermore, there is Chodey Gompa which is now the main city Gompa and the Choprang Gompa that is popular as the New Gompa. Likewise, in the case of the festival celebrated by the people here, 'Tiji" is the popular one. This is performed in April or May, whereby costumed Lamas dance in the village for three days straight.

Focusing on some of the trekking facts and itineraries:

Upper Mustang Trek
The Upper Mustang Trek will get you to know the remote lifestyle in the Himalayas. As it's isolated from the outside, this mysterious region has been able to solely preserve its Tibetan culture for many centuries. Falling in the rain shadow region of Nepal, the best part of this trek is that the rainy season cannot stop the trekkers from visiting this place. Trekking in Upper Mustang becomes a great option during the monsoon months starting from June to August. The weather in the lowlands, however, can be interruptive. Thus, it is best to add a day or two on each side of your itinerary.

Considering the most convenient way to get to Upper Mustang is to fly to Jomsom from Pokhara, the trek begins with a path that follows the famous Kali Gandaki River upstream to Kagbeni, where the restricted area of Upper Mustang takes 4 to 5 days to reach. Following the path, you will come across the oldest Tibetan monastery in the world, the Lo Gekar Monastery, near a place called Dhakmar. This Monastery was built in the 8th century by the famous Tibetan magician- Guru Rinpoche. Along with the permit cost of US $500 per person, this trip is also obligated to be arranged through a licensed trekking agency of Nepal because of the strict regulations in tourism. 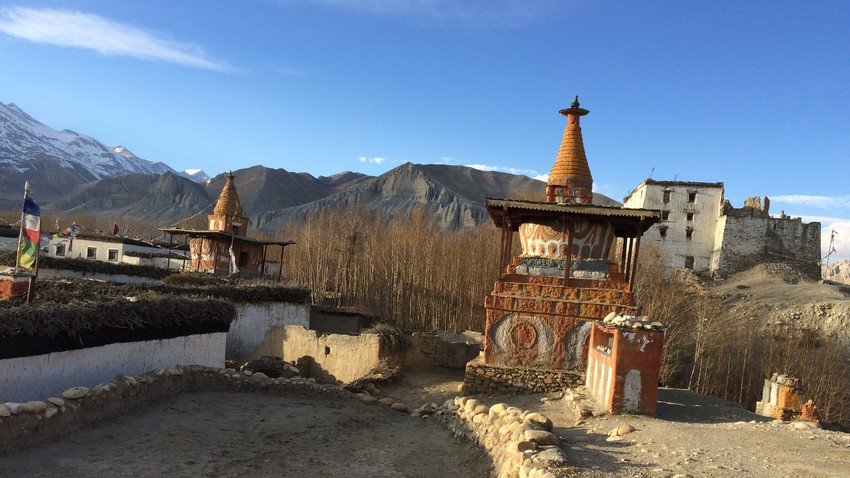 Tiji Festival Trekking
This is an ecstatic three-day festival rich in Tibetan rituals in the honor of a son who had to save the kingdom from destruction. It is believed that these dances with costumes and masks are supposed to drive the evil spirits away, which is organized by the Choedhe Monastery. The dance performed on the very first day is called 'Tsa Chaam', followed by 'Nga Cham' and 'Rha Chham'. This trek will please you with a jubilant experience that normally takes around 17 days.

Tiji Festival Trek requires two more extra days, costing the US $50 per day. Together with the extra cost, you will need to have at least two members in a group to obtain the trekking permit. This does not mean you will not be able to get the permit if you're a single traveler rather, you will have to join other travelers group. The trail will start by taking off to Pokhara from Kathmandu then move to Jomsom. The trek then begins, which includes Jomsom to Kagbeni, then to Chuksang, with the next stop being Syangbochen. Likewise, it is a five-hour trek to Ghami, then Charang. Finally, the trip takes you to your destination- Lo Manthang, where you get to witness the Tiji Festival. 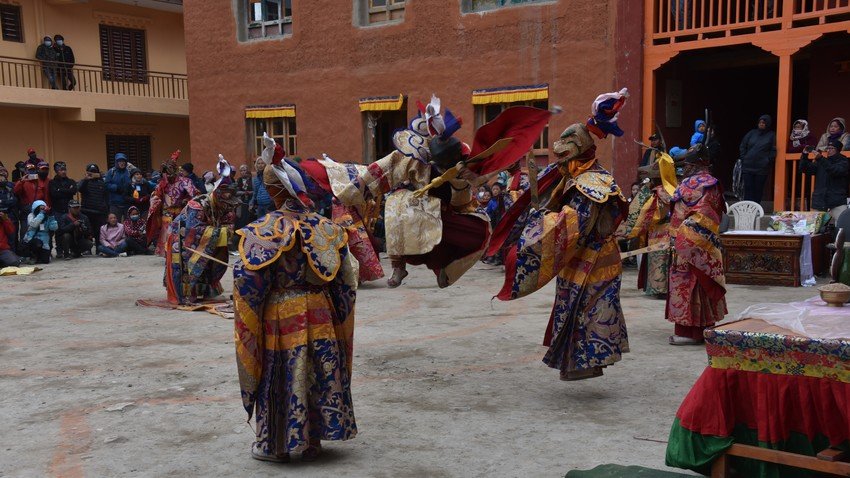 Mustang Mountain Biking
Gratifying you with the tremendous thrill and amusement, Mountain Biking in Mustang undoubtedly stays unforgotten. Mountain biking in Upper Mustang is swiftly turning out as one of the most popular cycling destinations in Nepal. The tracks can be tailored as per the skills since this is basically for fit mountain bikers. The geography of the place cannot be called effortless as most of the trails are above 3,000 meters of altitude. So, the climbing and descending part requires enough stamina and confidence.

This challenging yet adventurous trip can take around 16 days starting from Kathmandu. The most favorable times can be March to June and also October and November. This journey will surely not disappoint you despite the high permit fee of US $500 per person. Observing the gleaming mountain ranges and incredible Himalayan landscapes, mountain biking in Upper Mustang will fill you with the most unreal experience, leaving you with thousands of beautiful memories to cherish. 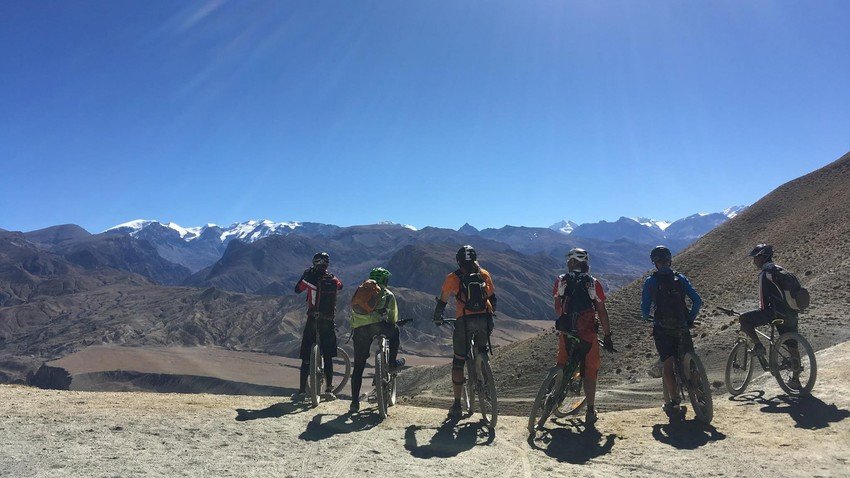 Upper Mustang Horseback Riding Trek
The extraordinary landscape of Upper Mustang makes it a popular region for a horse riding trek. This entire place will give you the mystical feeling with the overwhelming views of expanded yellow and gray hills taking you down to a green irrigated haven that meets the whitening walls of Lo Manthang. This trek will let you take your time and admire the beauty of this peaceful region. It will start after the flight from Pokhara to Jomsom on the upper Kali Gandaki River. You will then be proceeding on horseback and move along the trail that will pass through Tibetan monasteries, heart-warming villages and then towards the old capital itself.

This Horse Riding Trek offers a captivating panorama of Dhaulagiri, Nilgiri, Saribung, Manshail and other snow-capped mountains. The trek also reaches Ghar Gompa, Dzong Cave and the Rachung Cave where the trekkers can observe the best-preserved form of Tibetan Buddhism. This trek is also popularly known as 'Pony Trek', and takes around 15 days, allowing the trekkers to connect with the locals with ease on horses. Also, the trekking group needs to have two people at minimum. March to November can be considered as the best season for the trek considering the convenience. Riding a horse and sightseeing in Upper Mustang is known for its unique experience and is attention-grabbing. 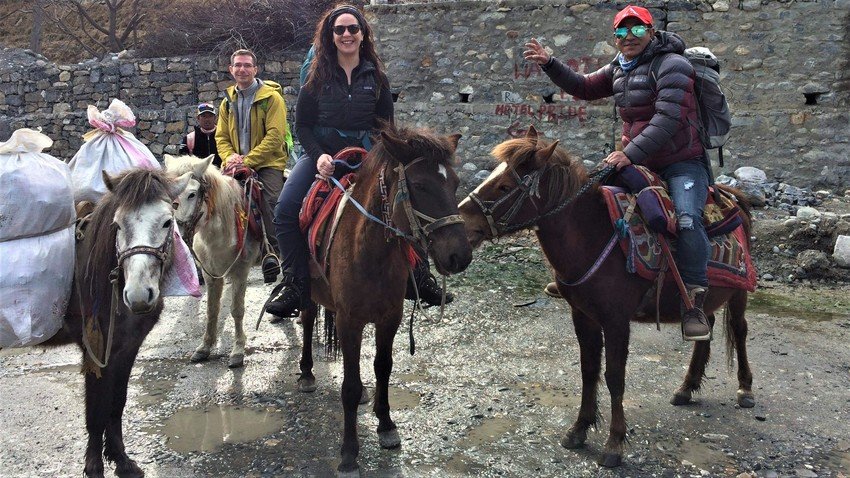 Special Permits to trek in Upper Mustang Region
The government of Nepal has introduced a surcharge for anyone trekking past Kagbeni. The trekkers need to collect an appropriate permit that must be guided by a liaison. ACAP (Annapurna Conservation Area Project) check posts are dispersed along the paths in Jomsom, Muktinath, Kagbeni and Lo Manthang. Normally, the Upper Mustang Trekking Permit costs US $500 per person that is valid for 10 days, each additional day costing the US $50. All of these rules are specified for the protection of their local tradition and to avoid outer influences.

In Conclusion
With these many admirable things to look for, it is not very surprising for this region to be strict on the entrance. It was 1992 when the gates in Upper Mustang finally opened for foreigners. But, even though the entry barriers are uplifted, for now, the regulations are still strictly prevailing. Staying locked up in its kingdom is the prime thing that has been able to hype up our curiosity on this secretive region of Nepal.