Arrival in Kathmandu Tribhuvan International Airport and you will be met at the airport by our representative who will be waiting with a Swiss Family Treks sign outside the terminal and transfer to Hotel by private car. Welcome drink and after you settle into the hotel there will be a group briefing with your tour leader. He will discuss the trek details and co-ordinate any last minute arrangements. Overnight at a 4-star hotel in Kathmandu.

Day 2: Full Day Guided Sightseeing Tour in Kathmandu Valley by private van.
After breakfast in the hotel, Drive to Swayambhunath Stupa which is very close form the centre of Kathmandu. It takes some minutes to be there. This Temple is also known as Monkey Temple which is considered to be self made Stupa. Then visit to Boudhanath Stupa: the biggest stupa in Nepal and one of the bigger stupa in the world. You can basically experience Tibetan Buddhism, culture and way of life in Boudhanath Area. Boudhanath area is the authentic place to buy Tibetan stuffs. Again you will be visit Pashupatinath Temple and it is one of the most sacred temples in the entire Hindu world. It is a sacred place where Hindus come to die and to be cremated. The temple of Pashupatinath is a large double roofed, gilt pagoda, decorated with brass, the gateway is plated with silver. There are images of Shiva along with other statues, shrines and temples dedicated to other deities in the complex. A circuit of the Pashupati area takes visitors past a sixth-century statue of the Buddha, an eight-century statue of Brahma the creator and numerous other temples. There are rows of Shiva shrines and Hindu pilgrims from all over south Asia offering ceremonies to worship Shiva, the Lord of Destruction. Overnight at a 4-star hotel in Kathmandu.

Day 4: Exploring the Halesi Mahadev Temple and Caves,
Today, early in the morning, we will make a visit to Halesi Mahadev temple. Situated in a cave, this region is believed to be the hiding place of Mahadev (Shiva) at one point of time and the three caves represent the three eyes of the Lord. It is a truly wonderful feeling knowing that we are visiting one of the oldest sites in Nepal, the traces of which can be felt up to the 12th century. Today after the puja we will explore the majestic caves and relax. Overnight at Halesi Mahadev.

Day 5: Exploring the Monasteries and surrounding hills,
Holding equal importance for people of the Buddhist faith, the legend has that Guru Padmasambhava meditated in these caves for 3 months? This region is made of up three hills a smaller one and two main ones. Next to the cave is the Maratika Chimney Takten Choling Monastery. We will explore the sacred sites of the monastery and call it a rest for the day. Overnight at Halesi Mahadev.

Day 6: Trek from Halesi Mahadev to Lamidanda,
From Halesi, after we have had our share of puja, darshan and spiritual guidance, we will make our way to Lamidanda following the same path that we came in earlier. Due to its position in the east, we will have the chance to view some lush green hills and the snowcapped mountains of this region. On reaching Lamidanda we will check into our guest house. Overnight at Lamidanda.

Day 7: Fly from Lamidanda to Kathmandu and transfer to Hotel,
From Lamidanda, with the breathtaking view of the Himalayas, and the mountainous terrain of Nepal we will make our way back to Kathmandu via flight. This is one of the most wonderful opportunities to appreciate the mountains and take some good pictures. You can stroll around the local areas upon arriving in the city. Overnight at a 4-star hotel in Kathmandu.

Day 8: Full Day Guided Sightseeing Tour in Bhaktapur and Patan Durbar square by private van
After breakfast, we are going to visit two historical monuments which represent early and late medieval history, architecture, culture and religion. Bhaktapur Durbar square is an ancient newari city, 13 kilometers far from Kathmandu stores numbers of Hindu temples, 55 windowed medieval durbar and offers you various examples of metal smith and wooden craft along with the opportunity of exploring traditional pottery work to the another corner. Patan durbar square is equally important which represents late medieval history, Culture and architecture. Overnight at a 4-star hotel in Kathmandu.

Day 9: Final Departure from Kathmandu
Your trip will come to an end today after breakfast. Your leader will be on hand to advise and assist with your onward travel arrangements and transfer to Kathmandu Tribhuvan International Airport by our private van around 3 hours before your flight schedule and flight back to your home/other travel destination.

P. S. Flight from Kathmandu to Lamidanda is operating only Nepal Airlines on Load Basis.

Join with us on Meditation Trek to Maratika Cave (Halesi Mahadev), Lodge Trek in 2022/2023.

Our Trek Package Cost doesn't include;
* Any meals in Kathmandu other than breakfast.
* Travel insurance.
* International air fare to and from Nepal.
* Nepal Tourist Visa fee.
* Items and expenses of personal nature.
* Any kind of alcoholic drinks, cold drinks, laundry, phone call, internet.
* Personal Trekking Equipments like sleeping bags, jackets (can all be hired in KTM)
* Emergency Evacuation (Helicopter Rescue).
* Any costs which arise due to a change of the itinerary, because of landslides, domestic flight delays, political disturbance, and strikes etc.
* Any other costs whatsoever, that is not mentioned in the cost included.
* Horse renting and additional porters due to natural calamities during the trek.
* Tips for guide, porters, driver... 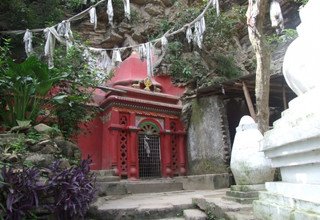 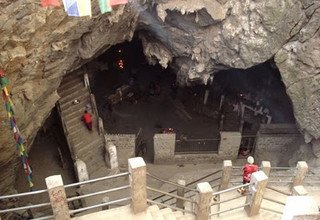