Our fascination for the unknown and the ability to explore the undiscovered have given us access to almost every corner of the world. One of the few regions which could escape foreigners was Mustang, a Buddhist kingdom in the Himalayas. Only a handful of Westerners had visited the area in western Nepal before it was opened to tourism in 1992. They brought back reports of a culturally highly developed, thriving medieval society and a landscape almost beyond description. It lies north of the two 8'000 meter peaks Annapurna I and Dhaulagiri I. The arid place with snow-capped mountains and barren hills reaches deep inside the vast Tibetan plateau. Cold winds sweep through narrow canyons and over plains. Erosion has left its marks in bizarre rock formations. Yet humans have lived in this hostile environment for centuries. They have built their settlements along rivers and creeks, the villages of whitewashed houses appear like oases in a huge desert. People work as farmers on their fields, sowing and harvesting barley and potatoes, and driving cattle to relatively fertile meadows. High up in vertical cliffs are inaccessible caves where people dwelled two thousand years ago. Much later the region came under the influence of the Tibetan Yarlung dynasty. In the 15th century the independent kingdom of Lo was founded by Ame Pal, whose invitation of the famous Buddhist scholar Ngorchen Künga Zangpo led to a cultural zenith never to be reached again in the following centuries. It was probably thanks to its remoteness that even in later times of conquest Mustang was granted large autonomy. The destruction of their culture and religion could be averted but the Hindu culture and tourism are definitely a threat these days. Only in 1950 was it officially declared part of Nepal. The years following the Chinese invasion of Tibet proved to be the most difficult ones in Mustang’s history. Large numbers of Tibetan freedom fighters set up their camps and attacked the nearby Chinese troops, putting Nepal in a delicate situation. In the 1970 the Dalai Lama asked the guerillas to stop their fighting, the Nepalese government arrested and sentenced some of the leaders. It takes some effort to discover the scenic and cultural beauties and mysteries of such an area. Our plan is to follow the Kali Gandaki from Jomsom northwards for two days, then taking the west route to the capital Lo-Manthang and from there back to Jomsom over the holy site Muktinath. Upper Mustang consists of two distinct regions: the southern part and the northern where the languages, culture and traditions are alike to those of the Tibetan people. This area is consider as one of the most interesting and picturesque places in Nepal. The whole area has an isolated and mystical feel to it, enchanting and inspiring visitors to this region. The trek to Lo-Manthang is through high altitude desert country climbing in and out of the huge sided valley of the Kali Gandaki. In places the gorge which the Kali Gandaki River runs through is the deepest in the world. This region is full of some of Nepal’s oldest Buddhist Monasteries, ancient and isolated villages with quaint white washed houses.

The Hidden Land of Dolpo was first settled by Rokpa farmers and Erokpa nomads from Tibet in the 10th century. It is one of the highest inhabited places on earth, with scattered fortress-Like villages and monasteries nestling among mountains of stark ascetic beauty. Initially very steep and exposed, the way into the valley is quite sensational, affording a breathtaking view of the waterfall where the Phoksundo Khola plunges into the valley south of Ringmo, and back to the west of Kagmara Himal. Upper Dolpo being one of the remotest, poorest and backward regions in whole of Nepal with its difficult terrains and extreme cold weather has been overlooked despite being a land of tourist potential and other opportunities. There are no motor able roads or airport in Upper Dolpo, except the airport near district headquarter, Dunai which is several days journey from Upper Dolpo. The people of Upper Dolpo are deprived of fundamental rights of good education, basic medical facilities, and others such as postal and electricity services. The death toll cause by lack of basic medical facilities is quite alarming. The existing schools in Upper Dolpo have only primary levels and health posts are functional only for a brief summer season. Recently some western NGOs have supported in opening up schools and health posts but due to the insurgency going on in Nepal, these NGOs are being apprehensive of fully implementing further programs. Therefore, some of the NGOs are being inconsistent in supporting their programs in Upper Dolpo. Dolpo Society continues to seek help from the government and INGOs, NGOs for the development of Upper Dolpo as a whole. As envision in Dolpo Society’s aims and objectives significant contribution has been made for the restoration and renovation of religious monuments, preservation of its valuable religious scriptures, artifacts and its unique monastery at Namdho Monastery, Shalri Monastery, Karang Gompa, Charkha Gompa, Dho-Tarap Gompa, Vijer Gompa, Kupa Gompa, Komang Gompa, Shimong Gompa, Nyishal Gompa, and Tichurong Gompa with cash or kind. Further, Dolpo Society has donated Buddhist canons text (Kangyur & Tengyur) to some monasteries. In an effort to improve village infrastructures, Dolpo Society has built and repaired 10 bridges at Phosumdho, Saldang and Dho-Tarap villages. Besides, 55 old and new Stupas were renovated and built at Shilri Gompa, Saldang Gompa, Karang Gompa, Yashir Gompa and Margum Gompa. Though modern schools are relatively new in Upper Dolpo, in the early nineties, NGOs like “Friends of Nepal” opened up one school in Saldang village, and another NGO “Dolpohilphe”, Germany, started schools in Namdho and Karang villages, Dolpo Society have lent all the support needed to establish these three schools according to the wishes of donors such as donating land for the schools and by providing free labors for building construction of the schools. The centre also helps provide water supply and other help that is needed for the smooth running of the school locally. The altitude ranges from 2500m to 5070m.The best known of the many isolated high Himalayan valleys across northern Nepal, Dolpo preserves one of the last remnants of traditional Tibetan Culture. Surrounded by high mountains including the Dhaulagiri massif to the southeast and cut off by high passes closed by snow half the year, Dolpo is close to Tibet, where people emigrated from perhaps 1,000 years ago. Dolpo remains a truly isolated corner of Nepal. Time has stood still here for centuries as the inhabitants of Tibetan stock continue to live, cultivate and trade the way they have done since time immemorial.Shey-Phoksundo National Park in the core of Dolpo Region is famous for snow leopard. A great Naturalist Rodney Jackson conducted his research on snow leopards in Shey Phoksundo area. The finally preserved Eco—system encompasses a wild and wonderful variety of plants and wildlife, including the blue sheep and leopard. A trek through Dolpo is an experience not easily forgotten.

Fact of the trek

Day 1: Arrival in Kathmandu and transfer to Hotel. Equipment Check and relax.

Day 2: Permits procedure and late afternoon fly from Kathmandu to Pokhara and transfer to Hotel.

Day 29: Fly from Juphal to Nepalganj and transfer to Hotel.

Day 30: Fly from Nepalgunj to Kathmandu and transfer to Hotel.

Join with us on Upper Mustang to Upper Dolpo Camping Trek via Ghami-La Pass (Bhanjyang) in 2022/2023.

NOTE: In case of emergency during the trip, Helicopter will be arranged by Swiss  Family Treks  & Expedition GmbH. The charges must be paid by the clients themselves.

Our Trek Package Cost doesn't include:
* Any meals in Kathmandu and Pokhara other than breakfast.
* Travel insurance.
* International air fare to and from Nepal.
* Nepal Tourist Visa fees.
* Items and expenses of personal nature.
* Any kind of alcoholic drinks, cold drinks, snacks, laundry, phone call, internet.
* Personal Trekking Equipment.
* Emergency Evacuation (Helicopter Rescue).
* Any costs which arise due to a change of the itinerary, because of landslides, domestic flight delays, political disturbance, and strikes etc.
* Any other costs whatsoever, that is not mentioned in the cost included.
* Horse renting and additional porters during the trek.
* Tips for guide, porters, driver... 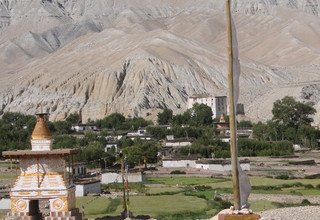 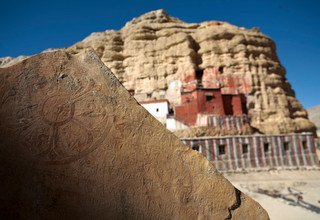 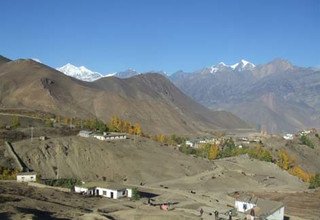 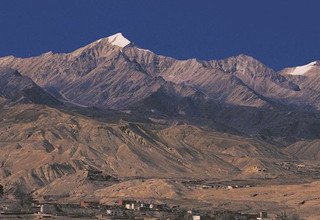 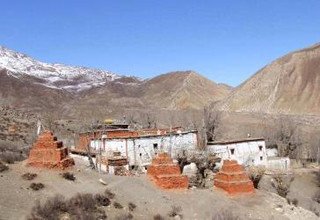 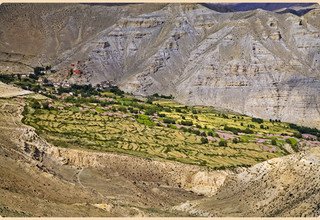 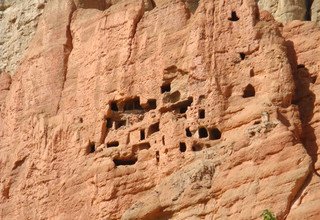 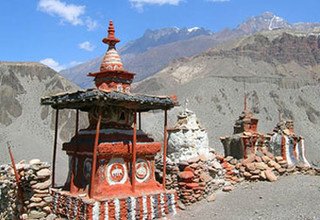 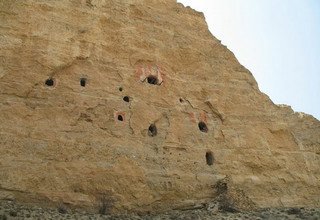 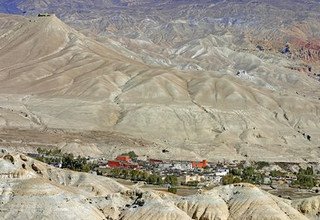 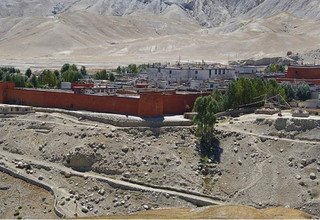 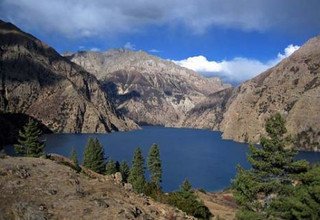 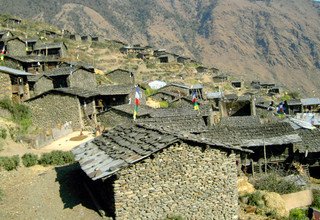 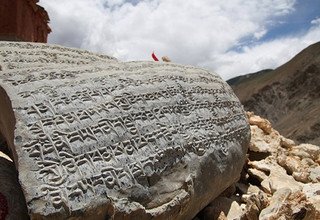 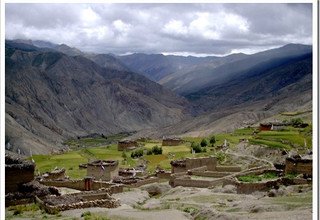 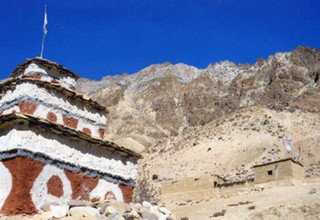 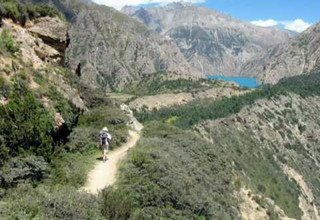 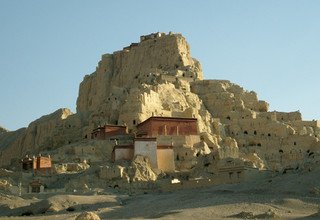 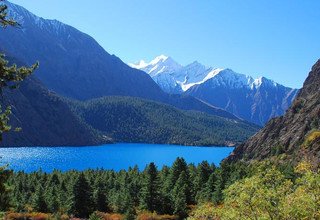 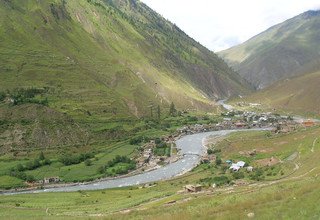 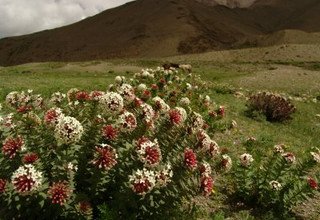 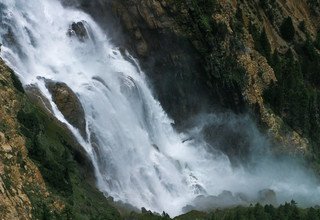 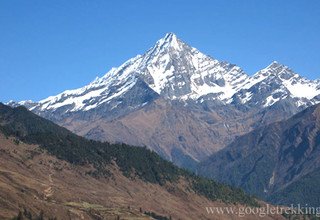 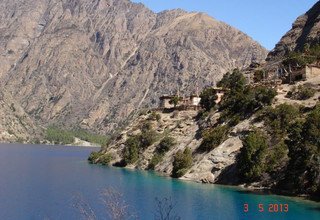